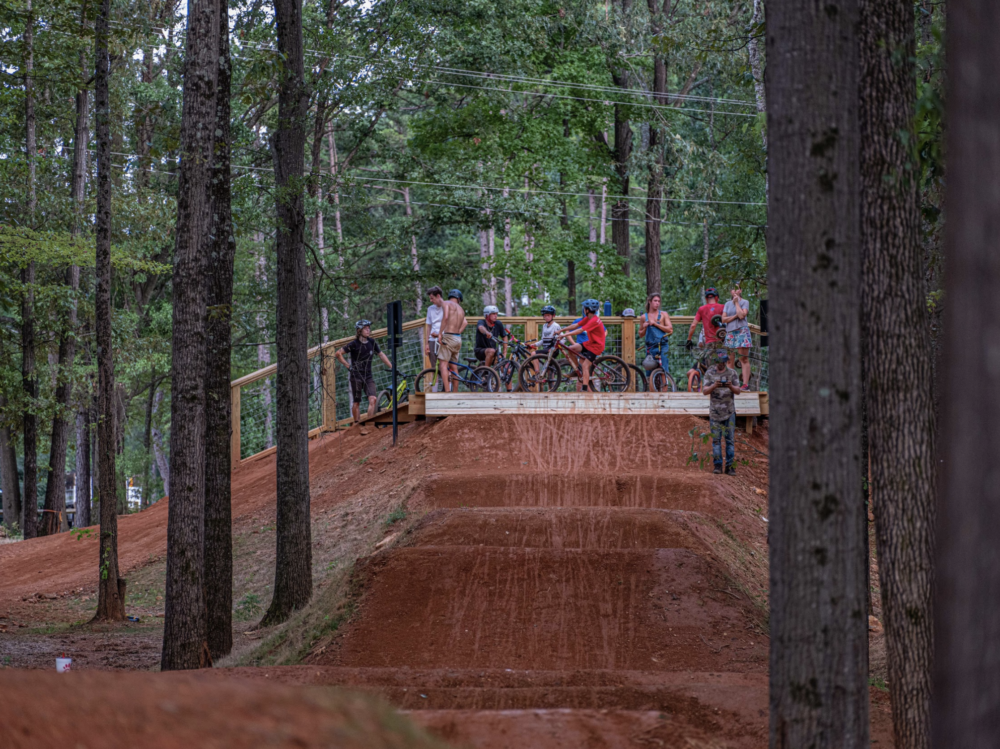 Sponsored by Hot Spot & Budweiser of Spartanburg.
A staging area for riders to congregate before dropping into the jump line. 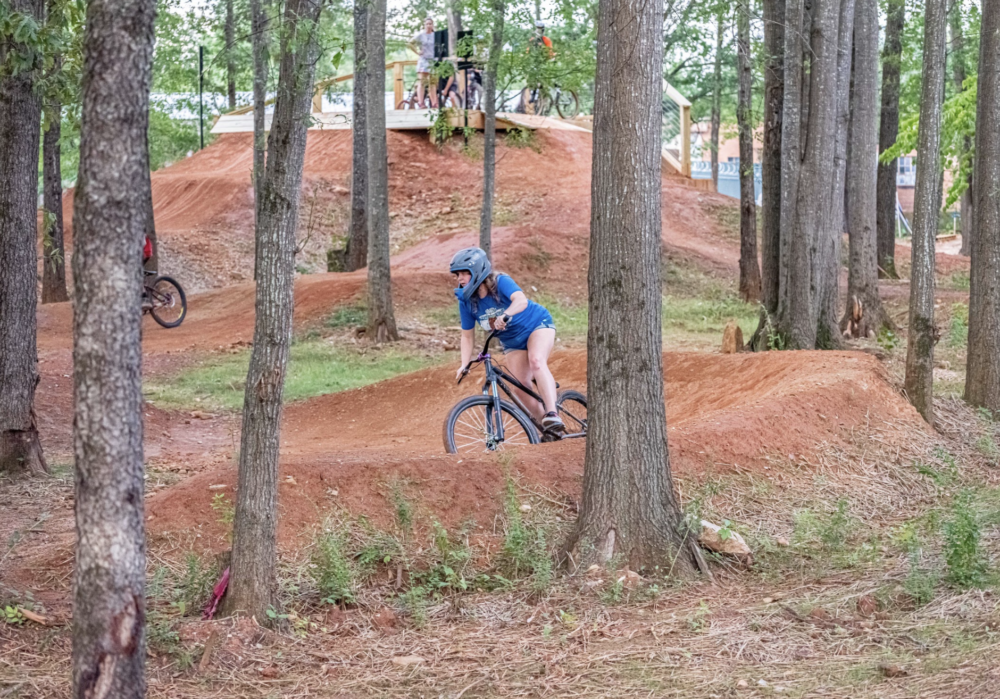 Sponsored by The Longleaf Fund
EASY: A tread trail system consisting of numerous flow features such as berms, rollers, jumps and tables to accommodate and entertain riders of varied skill. 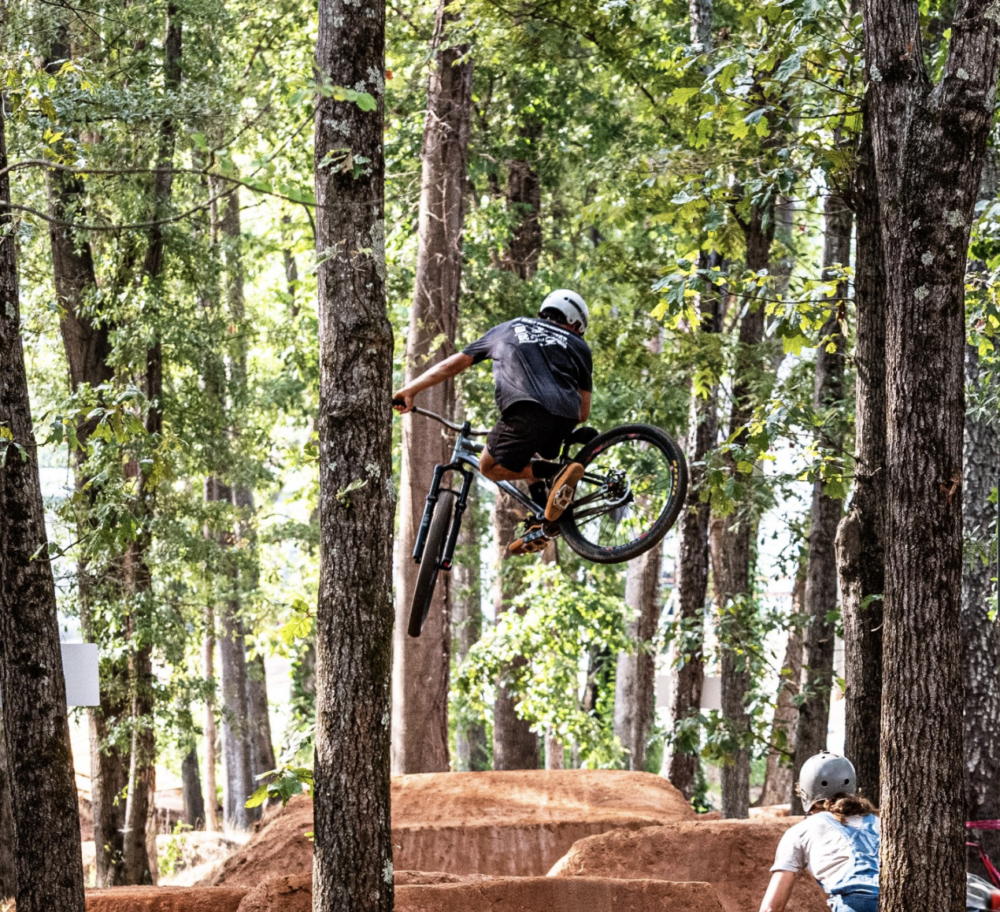 Given for Michael Lawter and his children
BLACK DIAMOND: A dirt jump line consisting of 5 consecutive earthen jumps with dirt takeoff and landing pads. 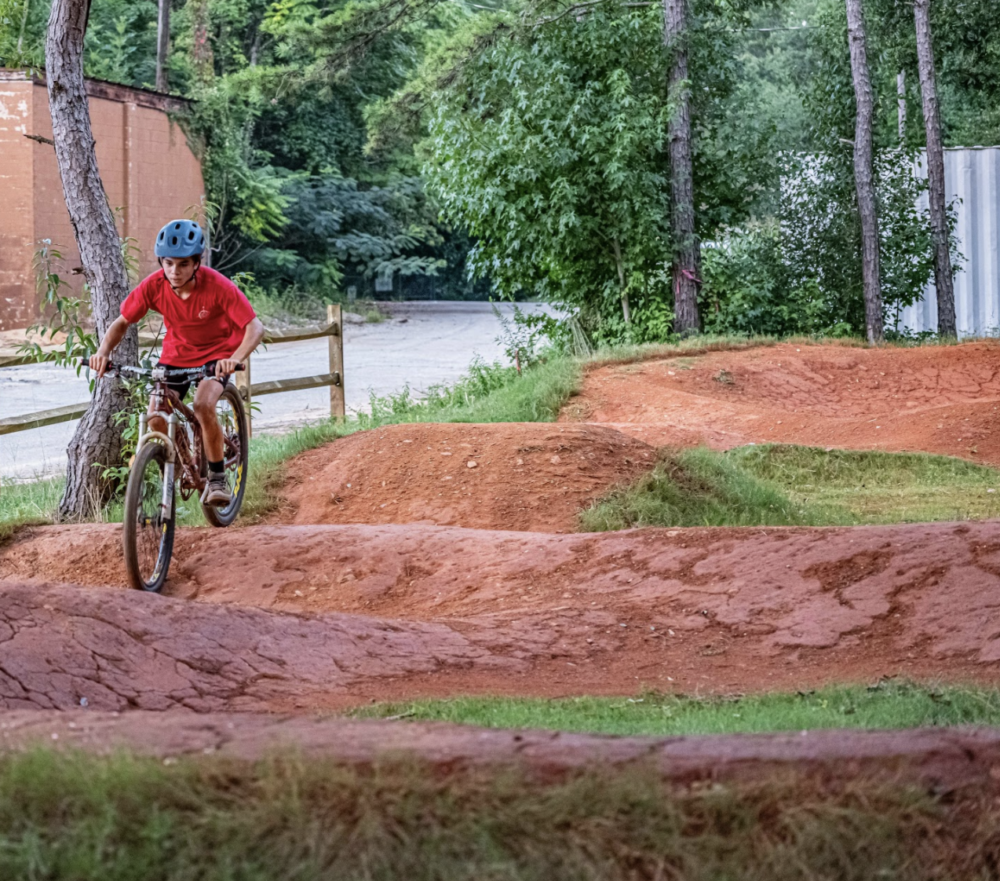 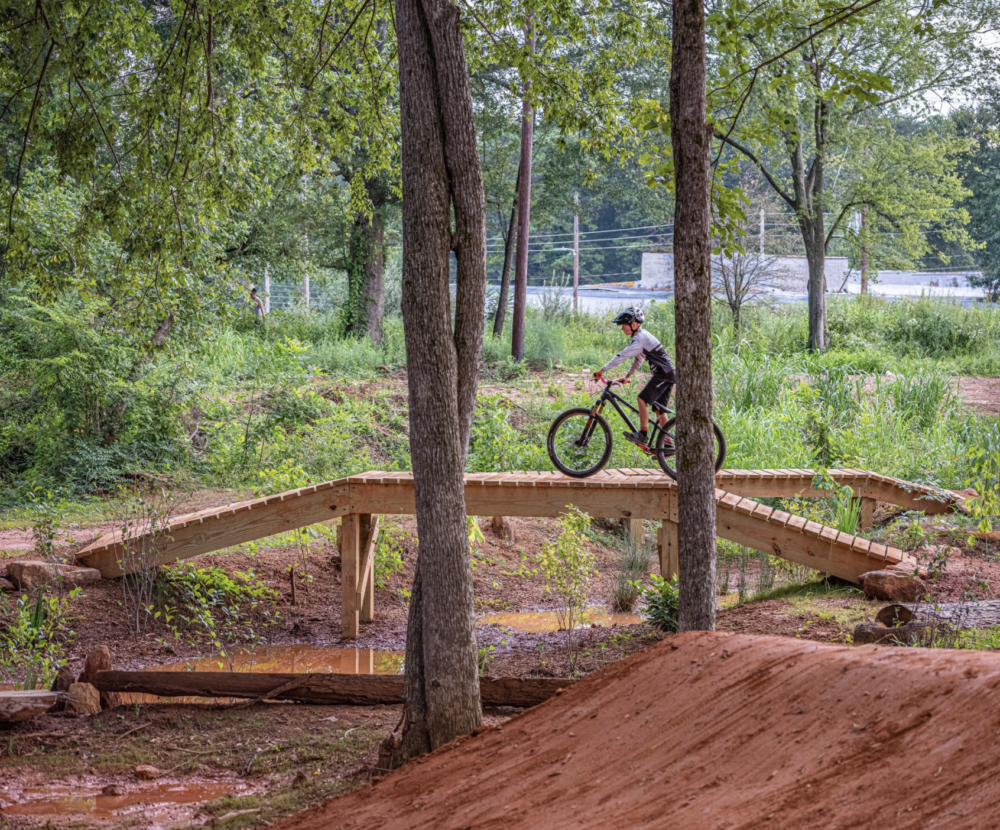 Sponsored by The Duke Energy Foundation
EASY: A unique riding landscape element designed to collect stormwater runoff from the site which will also improve downstream water quality by capturing debris and treating pollution via infiltration and groundwater recharge. 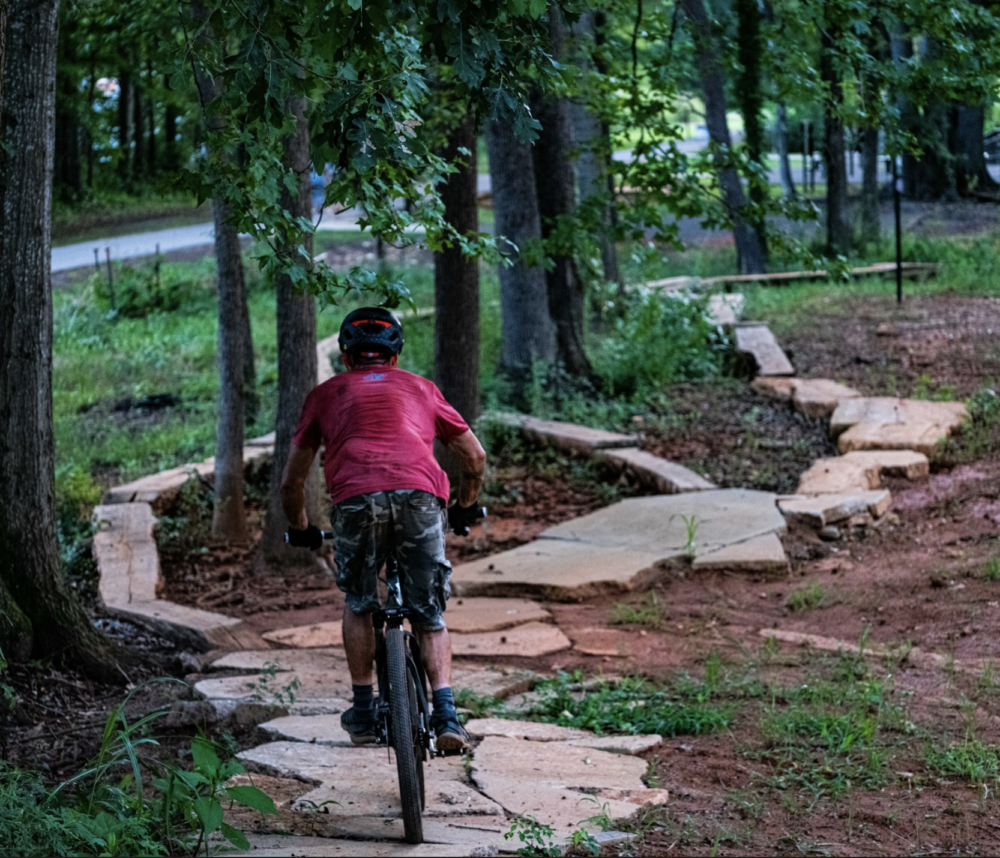 Sponsored by Lamar and Page Baehr & BVI Development
MODERATE: An elevated half log trail system built with white oak half logs that serves as a skill progression area where riders can practice balancing and bike control. 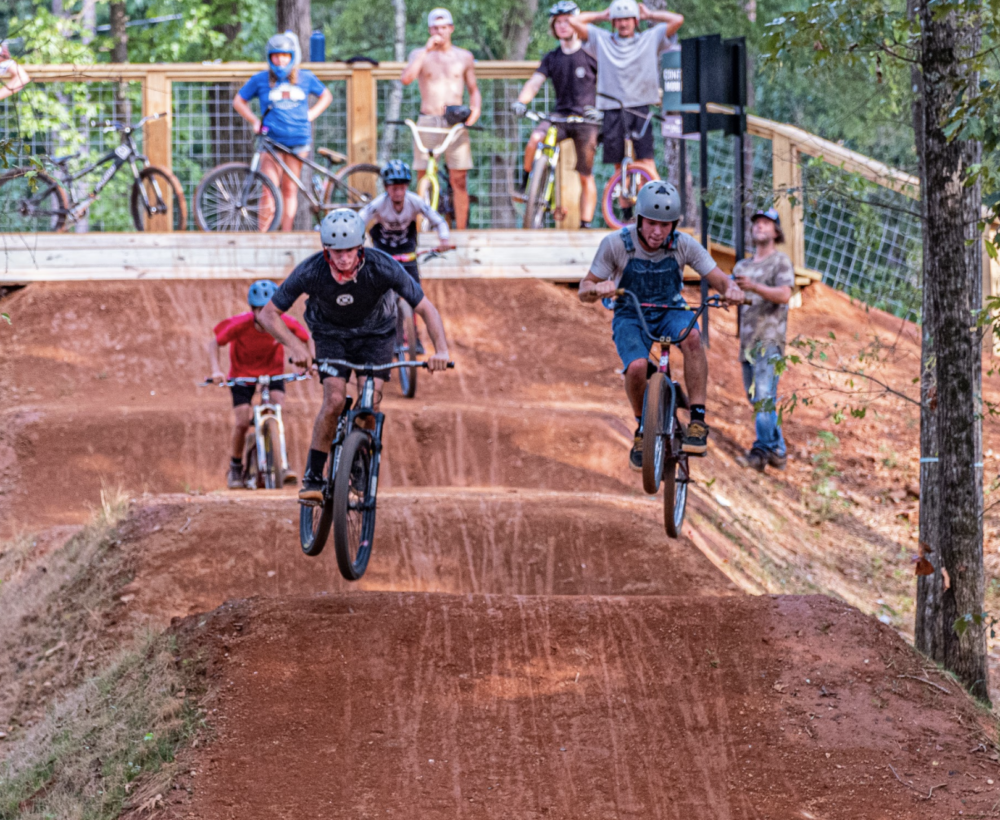 Sponsored by Hub City Brew Fest.
MODERATE: May the rider with the best rhythm win! A continuous flow line where multiple riders can race and progress their skills. 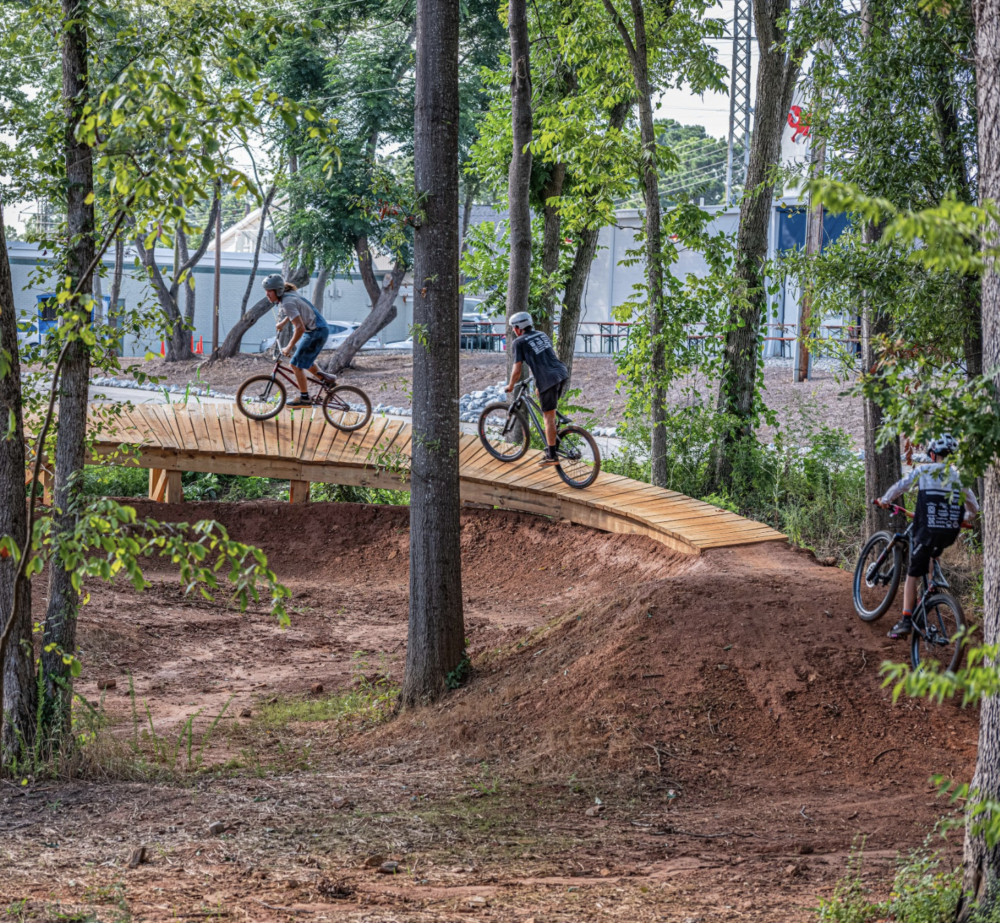 Sponsored by Partners for Active Living.
MORE DIFFICULT: Wood is good! Ride the wooden banked turn and drop into the next series of jumps. Accessible from the more difficult trail. 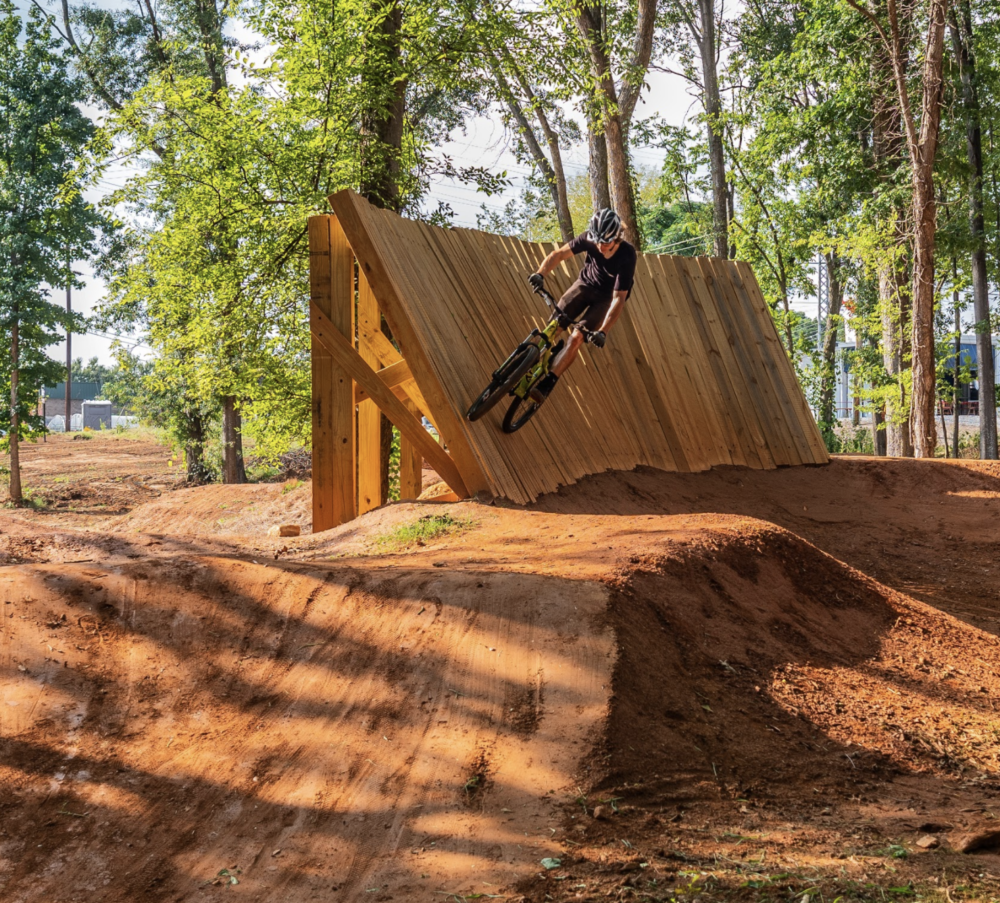 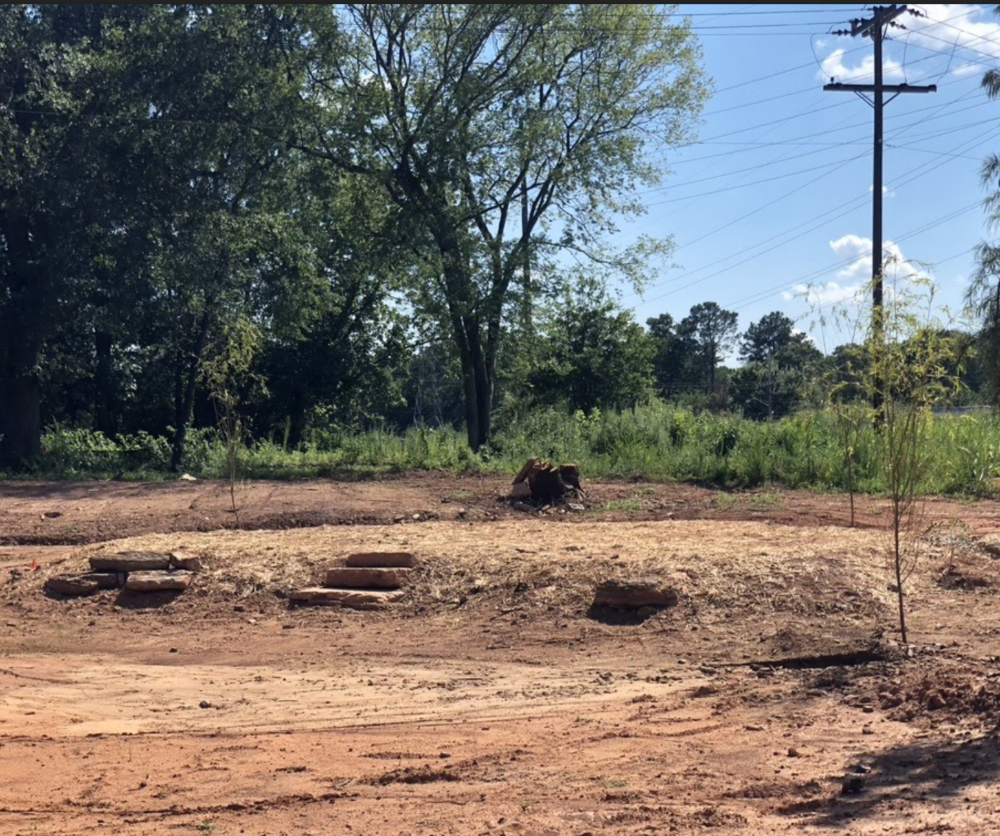 Sponsored by Ride Garden LLC. Take a rest under the weeping willows while you cool off and gear up for the next session. Enjoy the picnic table donated by Reid Stille's Eagle Scouts.

The Vic Bailey Subaru Bike Park would not be possible without the help of these partners. 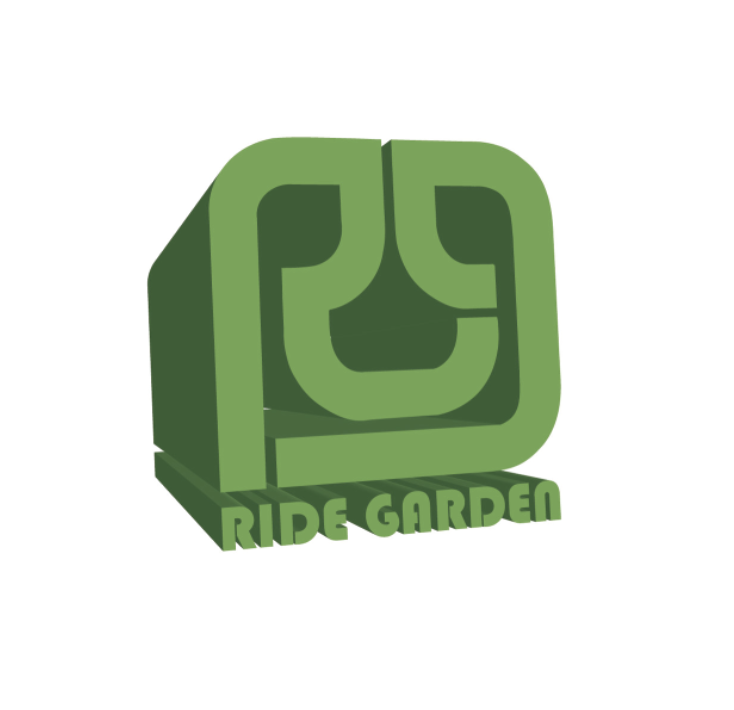 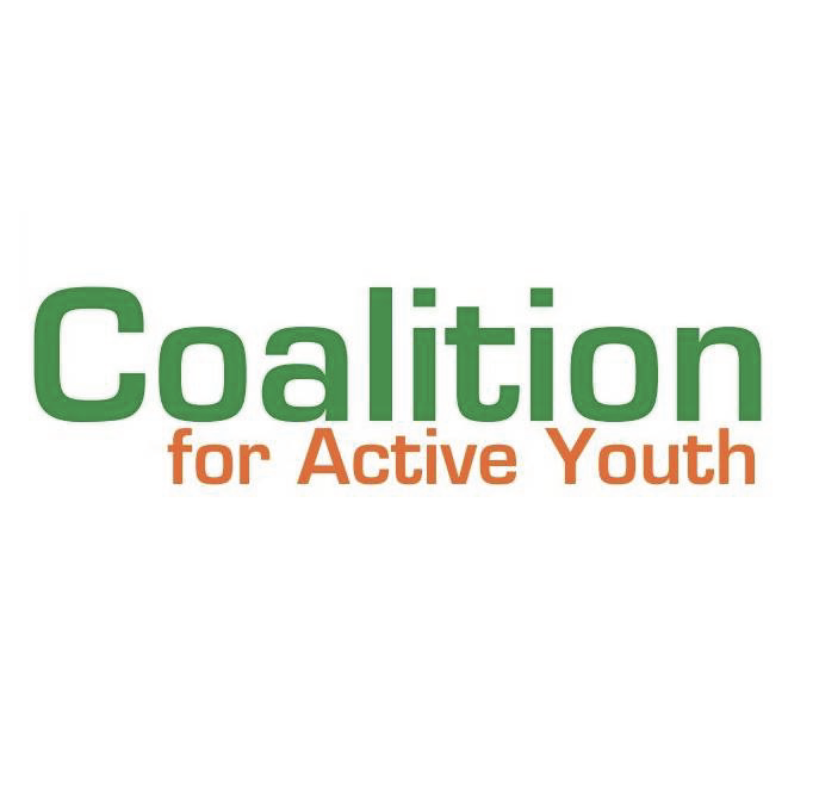 Coalition for Active Youth are the visionaries for the Spartanburg Bike Park. 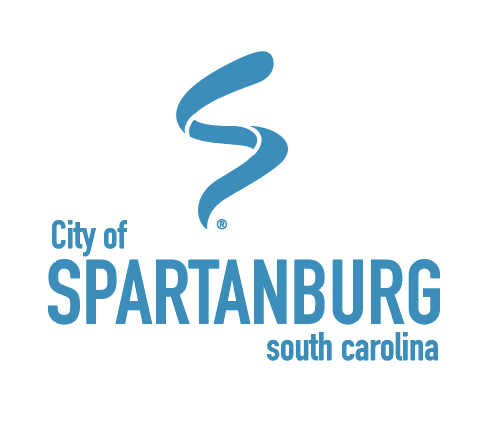 Thanks to our sponsors, community partners and individual donors.

We hauled in 400 truckloads of dirt to build this park from the ground up!

The park was made to suit all skill levels and built with progressive features so you can start small and progress upwards.

Rules of The Trail

The way we ride today shapes mountain bike access tomorrow. Do your part to preserve and enhance our sport’s access and image by observing the following rules of the trail, formulated by the International Mountain Bicycling Association (IMBA).

For your safety please stay off the specialized bike trails. Do not stop in areas with poor visibility. Find a safe area to watch riders.

Parents, please make sure your kids do not wander in front of bikes on the trails. Do not walk on terrain features. Respect the native vegetation and wildlife.

The bike park is an unsupervised facility. All riders must complete and return the Bike Park Waiver before riding. Riders under 18 must have a guardian’s signature with their waiver submission.

Dirt jumping is inherently dangerous and may cause injury. You can minimize injuries with the proper safety gear.

Top 5 Things You Need to Know

Top 5 Things You Need to Know Before Hitting The Park

Where do I park to visit this park?

A parking lot for The Rail Yard is located along Old Glendale Road just behind 907 South Pine Street.

Can I get riding lessons?

Our friend Michael Kane is offering one-on-one lessons for any riders interested in getting started on the trails or taking their skills up to the next level.

Lessons are $50/hour and are available during weekday evenings and the weekends. Reach out to Michael at [email protected] or give him a call (864)884-4605.

Is there somewhere to clean off my bike after riding?

A bicycle repair and cleaning station has been located at The Flock Shop, a restaurant that backs up to the park and is located at 970 South Pine Street (https://www.eatdrinkflock.com/). We are grateful for their community support and partnership.

What is the address for the park?

The Vic Bailey Subaru Bike Park is part of The Rail Yard Community Park. It is located at 353 Forest Avenue.

What other outdoor recreation activities are happening nearby?

In the coming years both end of the Rail Trail will be extended. The northern end will extend into downtown Spartanburg and the southern will lead out to Glendale Shoals along Country Club Road as part of the The Dan Trail System (dantrail.com)

School’s Out Bike Bash at the VBS Bike Park

A big congrats to our Jump Jam winners!

Got a burning question?

The Bike Park is OPEN! Check Facebook for More Info!

Check out our Facebook page, Vic Bailey Subaru Bike Park, before you head out to ride. Park may operate on a delay or closure due to maintenance and inclement weather.